Classics Teacher Training Then and Now…

Aisha Khan-Evans looks at the way we train Classics teachers.

The landscape of Classics education and teacher training has changed enormously over my time leading the PGCE at King’s College London. It has not been so much a game of two halves (I have clearly been watching too much football) as a record five-setter, not yet done and dusted (too much Wimbledon). Those of us involved in Classics education have certainly endured some challenges during that time; my tenure thus far could be seen as bookmarked by events such as the threat to Ancient History A-level (with Boris Johnson donning a toga in protest) and more recently the ‘decoupling’ of AS and A-levels.

The Curriculum 2000 reforms had broadened the A-level curriculum—a positive move for Classics, with AS Classical Civilisation, for example, seeing a huge increase in entries, with around 5600 in 2015. The most recent reforms (by contrast) leave AS-levels for smaller subjects such as Classics on very shaky ground, with total AS entry numbers only in the hundreds.

The trials of the last couple of decades would not surprise those training, learning or teaching Classics before then.  Martin Forrest’s 1996 account of the reform of Classics teaching a generation or more ago demonstrates the strength of feeling and the industrious and strong-minded nature of the Classics educators who did so much to ensure the survival of Classics at that time. Even so, it was not until my MA at King’s that I realised the enormity of the debt owed to those earlier generations, not least those involved in the formation of a new subject association (JACT—now subsumed within the CA) and the Cambridge School Classics Project. 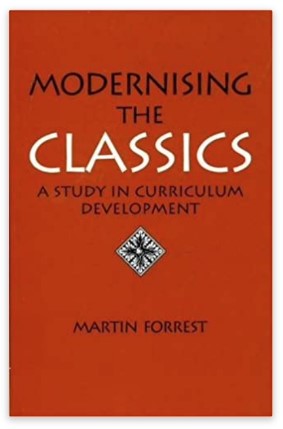 Those advocates did much to ensure the survival of Classics in schools, including producing course books and developing examinations at a time when the subject was seen as irrelevant in the new era of education.  This new era began with the ‘Leicestershire experiment’ in 1957, a plan to organise the county’s schools along comprehensive lines, a new pattern of schooling which would expand and eventually become mandatory under the 1976 Education Act.  During this time, teacher training places were severely cut across the board, and only a small number of colleges surviving to focus solely on teacher training.  There do still seem to be people (not Classicists, I hope) who refer to ‘teacher training’ in derogatory terms and who use the name ‘teacher training colleges’ as a proxy for all they perceive to be wrong with education—even though such institutions no longer exist.  Unsurprisingly, given those and subsequent reforms, training courses dwindled.  By the time of my arrival at King’s, there were only two: King’s College London and Cambridge.

Fortunately, however, training numbers and routes into Classics teaching have increased over the last decade or so.  As with the regular iterations in examination specifications, teacher training ‘standards’ have been written and re-written; if my memory serves me well, my predecessor’s trainees had to show that that they could meet 60-something different ‘standards’; we now have eight ‘Teacher Standards’.  I am aware that this is over-simplified, but more detail would not make for riveting reading...

During PGCE sessions in the late ‘noughties’ we addressed what we meant by Classics along with questions on its place in the curriculum (the point of learning Classics).  A search for reading for those sessions brought up very little written after the early 1990s, the late James Morwood’s edited volume The Teaching of Classics and Bob Lister’s work aside.  That is not to say that some of the older reading—John Sharwood Smith’s tome, for example, or older JACT Review articles—was not useful.  Nevertheless, I am sure my colleagues’ reading lists had a more youthful average age, and although the content itself may have been no more pertinent, perhaps as Classics educators we are rather self-conscious of the image of our subject we are conveying.

Moving into the 2010s/ early 2020s, Classics educators (and students) probably had/have well-rehearsed arguments for the importance of Classics but there are also so many more springboards for those discussions.   Resources now might include videos (such as the Warwick University video Making Classics Matter: as Michael Scott puts it in that video, ‘Classics as sociology’) and references to the work of scholars such as Martha Nussbaum, whose thoughts on the role of education in general are rooted in her expertise in classical philosophy.  A journalist writing in The Times in 2010 commented on the increasing interest in the classical world as visible nowhere more than through the resurgence of ‘sword and sandals’ epics in cinema; and a reading on Latin Teachers in Film might lead to thoughts of perceived stereotypes of Classics teachers and Classics lessons, discussing what those stereotypes say about perceptions of Classics, the extent to which these may (or may not) have changed and how we might contribute to moving away from some of those stereotypes. Goodbye Mr Chips was published and filmed in the 1930s yet still embodies some of the misconceptions surrounding Classics teaching (although as a child, before I knew of a thing called Classics, I very much enjoyed such ‘old school’ films).

As already noted, some of the pre-2000s (even some pre-1980s) reading still generates useful debate; but often it is the more recent articles from JCT, in its revitalised form (thanks to my fellow teacher trainer Steven Hunt) which prove useful for explorations of current debates on, and approaches to, Classics.  Appropriately, in a 2016 JCT article, Edith Hall noted that ‘The Greeks, more even than the Romans, show us how to question received opinion and authority’ and while that clearly applies across the study of Classics, there is an increasing number of new resources (journal articles, blogs, online presentations) which do just that in relation to Classics education.

Like most of us over the last couple of years, I struggle to remember the last face-to-face meeting I attended but perhaps one positive consequence of the pandemic is the proliferation of online material for Classics; it seems as if this has existed for subjects such as Maths and Modern Languages for a long time, so the variety of such material could not have come too soon.  Much of the online material and discussion centres on the need to modernise the world of Classics education, and these discussions may feel less comfortable for some of us than for others.  Perhaps many Classicists, in our early classroom encounters with the subjects, appreciated what we thought was the stability and reliability of the classical world and this may have been what drew some of us to continue our studies. In my case, this began with the ‘certainty’ of Latin; even prose composition tasks contained certainty in that we knew there would be a correct way of rendering the English passage into Latin (a certainty which ebbed away a little during university prose composition seminars).

‘Certainty’, then, has been overtaken by interrogation of that ‘received opinion and authority’. While the PGCE has always addressed ways of making Classics accessible for all, inclusion was probably given a fairly wide definition. Having previously led a faculty in a large comprehensive school with a diverse intake and classical subjects on offer for all, I relished the moments when option forms came in for learners whose ‘background’, for want of a better term, would not necessarily lead them in that direction, or whose educational needs might have resulted in other schools in ‘extraction’ from lessons such as MFL or Latin.  In 2021, inclusion has a higher profile across all sectors of education and has a broader, yet also more specific, definition.

Teacher trainees will now be examining the received opinion of the curriculum itself, considering, along with educators in all subjects, ideas around ‘decolonising the curriculum’ and what that might mean; this entails thinking about whose voices we hear in the subject matter of the classroom and in examinations, and how we can not only use the material we have to discuss this but consciously include material and ideas which acknowledge and promote previously unheard or marginalised voices. Trainees are probably now more aware than previous cohorts that the notion of ‘race’, in terms of skin colour, is not a discrimination the ancients seem to have made.  They might know that Nelson Mandela and other inmates of Robben Island put on Antigone and inspired Athol Fugard’s apartheid-era play The Island. They may also be familiar with the ways in which groups have ‘claimed’ Classics and the importance of drawing on a variety of perspectives, not least to counter some of the alt-right claims, as detailed by people such as Donna Zuckerberg and Mary Beard; the former sums this up in quoting the latter, ‘Aeschylus has over the years been performed both as Nazi propaganda and to support the liberation movements in sub-Saharan Africa’. 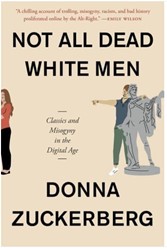 Classics is of course an ideal subject through which to discuss inclusion, ethnicity, sexual orientation, violence against marginalised groups, issues of identity and much more.  When 21st century trainees consider issues of course-design and teaching materials, it is important that they think about the classical world they are presenting and look hard at the characters in course books and their respective places in the ancient world.  They interrogate courses from a broad perspective; they might think about which characters hold the power, how the characters are depicted in terms of illustrations (whether modern racial stereotypes, for example, are reinforced in these) and what their respective roles are in the narrative, thinking about the view of the classical world they are conveying to the learners in their classrooms.  The latest trainees have been interested in the ancient world as portrayed in Suburani, for example, and are keen to see how the revised version of the Cambridge Latin Course might differ from that which they have seen so far.  Next year we might even think in terms of a hypothetical Bechdel test (which relates to women in fiction) for Classics courses.

Of course, the pendulum may well swing again but perhaps we are now more inclined to invoke the spirit of those pioneers of the 1960s and 1970s; where Classics education in the late ‘noughties’ was sometimes rooted in survival, recent years seem to have felt more conducive to debate, to exploration of different ways of enacting Classics education, to looking outward and forward.

Dr Aisha Khan-Evans is the Classics PGCE Subject Director in the School of Education, Communication and Society at King's College London, before which she taught in comprehensive schools and a sixth-form college in and around London.