ANCIENT GREEKS AT WAR: Warfare in the Classical World from Agamemnon to Alexander 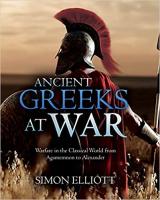 This is a history of warfare in the classical world from Agamemnon to Alexander, a companion to the author’s Romans at War. Lavishly illustrated, with clear diagrams of all the major battles, the popular historian Simon Elliott takes us from Minoan and Mycenaean military culture, through the Persian and Peloponnesian wars, and on to the Macedonian empire and its subsequent disintegration.

This is military history: E. underpins it lightly with only a handful of literary and epigraphical references, and he steers clear of the deeper arguments about the political causes of each conflict and the importance or otherwise of trade in those tensions between growing city states. For the ancients, of course, war was a constant, a means of seeking justice or redress, as well as an instrument of advancement. Western military culture today, its vocabulary and metaphor, derive from the ancients, the works of whose poets, playwrights and historians works were dominated by war and battles. Caesar in his wars looked back to the campaigns of Alexander the Great, just as Alexander himself looked back to the Iliad, still the outstanding literary work of warfare twenty-seven centuries after it was written.

The earliest Greek times saw two major innovations in warfare—the chariot, a weapon imported from the east, and the first naval forces, deployed to tackle piracy as well as defend against the neighbours. Infantry modernised, with better body armour, shorter spears and javelins, supported by slingers and archers. The Persian wars saw fuller use of cavalry, supported by heavier chariots. Bigger fleets were needed to transport substantial armies or to interdict them. Every Greek city had to finance, build and man its triremes.

With Philip of Macedon and later Alexander, strategy and tactics came of age. The plains of Anatolia and Mesopotamia saw huge armies, often as many as 35,000 strong, deployed in phalanxes as many as 10-16 deep in oblique echelons, with light troops and cavalry in support. We see the first systematic use of combined arms as successful generals outmanoeuvred their opponents with battle tactics such as the ‘hammer and anvil’. Their cavalries got longer lances, the infantry phalanxes two-handed pikes; sophisticated siege engines were developed to attack walled cities.

Every major battle is detailed here, with its rival formations carefully mapped, showing how it was won or lost. Warrior types are painstakingly described, lest you confuse your pezetaroi with peltastoi, hypaspists with argyraspides, thureophoroi with thorakitai. Militarists will be fascinated with how helmets, body armour and the main weapons evolved. As in so many other later wars, each side fielded thousands of mercenaries: Greeks often pitched against Greeks.

E.’s style is breezy, often personal, occasionally cliched (‘the wheels of fate again spun’). You won’t find here the big arguments about the rights and wrong of Athens and Sparta, or the inner machinations of Alexander’s court. Nor is this the book to delve into the concept of a just war (see my review of Bradford’s War: Antiquity and its Legacy, https://classicsforall.org.uk/news-events/news/war-antiquity-its-legacy). But if you want a close-up view of all those battles, this is the book for the sixth form library.