ARTEMIDORUS: THE INTERPRETATION OF DREAMS 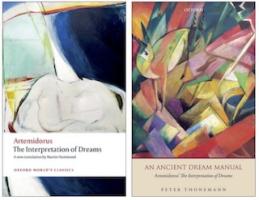 This review is twinned with:

Artemidorus was a Greek dream interpreter living in Asia Minor during Roman rule, around the turn of the third century AD, and he committed his craft to five volumes of technical knowledge throughout his career. It is singularly important as the only dream manual to have survived complete from antiquity, and it is also a rich source of information regarding other dream books in antiquity, given his vast knowledge and liberal referencing of them. His distinctly un-literary approach gives a unique insight into how dreams were interpreted by such professional figures, the differences in the dreamer’s gender, age and status that would alter the interpretation, and the various ways in which such an interpreter of dreams could hedge their bets and keep their secrets. As such, it is a fascinating and unique text, and one which sheds new light upon the ancient world.

Artemidorus’ text has been fairly inaccessible to English-speaking scholars up to now. The existing translations have been both difficult to get hold of and prohibitively expensive for the mildly-curious scholar; one would have to have been fairly serious about wanting to engage with this work to go to the trouble and expense of tracking down a copy, before contemplating the difficulties that such an obscure ancient text can present to the modern reader.

These two volumes remedy these problems. Hammond’s accessible and affordable translation is a joy to read. He builds upon the previous seminal critical edition by Roger Pack but updates his version with information from a ninth-century Arabic translation, to which Pack did not have access but which helps to illuminate some aspects of the original that have been corrupted through time. Given the influence that this particular ancient dream manual has had upon great thinkers like Freud and Foucault, finally having a paperback and affordable version of the text will benefit scholars outside of the field of classics, as well as providing classicists with a new perspective on this particular period in the ancient world.

It may be a bold assertion but Thonemann’s companion commentary is what every scholar approaching this text needs. His clear and useful explanations put the text into context of its time, he uses quotations from both the text and other ancient literature to illustrate his points, and he highlights difficulties within the text, which otherwise the reader might miss. His analysis helps to explain Artemidorus’ approach to deciding which dreams are worth interpreting, and the very different approach to dream interpretation that Freud takes in contrast (in short, Freud uses dreams to analyse the dreamer; for Artemidorus, the ‘right’ dreams to analyse are always predictive in nature, originate from the dreamer’s psyche, yet they do not tell the interpreter about the dreamer themselves). T. highlights how Artemidorus structures his arguments, and provides detailed, evidenced analysis as to what is being shown about Artemidorus himself, his home, and his profession, through his deeply knowledgeable references about the classical world more generally. The range of information upon which the author must draw to make such analysis demonstrates profound erudition, and the reader finds themselves educated more widely about antiquity, as well as about this particular text.

It would be easy for such knowledge to be presented in an overly intellectual and inaccessible way but the pleasure of reading T.’s companion text is that it is written in clear language, aimed at comprehension rather than ostentatious exhibitionism. There is also humour; in the introduction to H.’s translation, the reader is advised on approaching the text not in a linear fashion but is given guidance on which sections to read in what order, with the gentle injunction that ‘[t]he mind-boggling chapters on sex-dreams towards the end of Book 1 (1.78-80) are not to be missed’ (p. xxviii). In the companion text itself, T. begins his analysis of the role of plants within the dream manual with the reflection that ‘[f]or all of its problems, Artemidorus’ account of animal-dreams is a masterpiece of organisation and intellectual coherence by comparison with his treatment of plants’ (p.96). Such down-to-earth humour reflects the fact that this ancient text is neither literary nor elite, and it makes it more accessible. T.’s tone helps to illustrate the gap between our reception of dream interpretation and that of those living in antiquity in a far less alienating way.

For those scholars wishing to delve deeper into the text, T. grounds his analysis in linguistic knowledge too; his knowledge of which verbs constitute ‘a technical bit of sports jargon’ (p. 165) adds a dimension that might well go unnoticed. References to modern examples also provide greater understanding and supporting points with evidence from other ancient texts offer the reader a more substantial basis on which to study this unique text within the ancient context.

For anyone approaching Artemidorus’ text afresh, I would highly recommend starting with T.’s companion text. Having considered the various topics and approaches taken in the dream book, with helpful examples, the reader is then ready to fully enjoy H.’s readable translation. The collaboration between H. and T. has given us an exemplary pair of texts with which to study one of the most fascinating ancient sources and ancient figures that is available to the classical scholar.