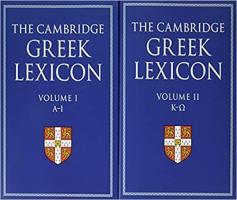 The first, and most welcome, task for a reviewer must be to congratulate James Diggle and his team for the triumphantly successful completion of their twenty years of labour. The two volumes do not replace LSJ, nor are they intended to: rather, they stand in their own right as a distinctively new lexicon, of intermediate size, says the Preface, ‘designed primarily to meet the needs of modern students … but also to be of interest to scholars, in so far as it would be based upon a fresh reading of the Greek texts, and on principles differing from those of LSJ’. This is explained in detail in ‘Structure and Content of Entries’, pp. xi-xiii.

The scope of the Lexicon is also given in the Preface: it extends from Homer to the early second century AD, ending with Plutarch’s Lives, and includes ‘most of the major authors who fall within that period’; mildly surprising is the omission of Lucian (contemporary with Plutarch), but few eyebrows will be raised by the absence of Nicander, Aratus, Oppian or even Lycophron. The Anthologia Palatina, as a body, has also been excluded. The list of authors who ‘make the cut’ does include quite a few less well-known names who appear in such volumes as West’s Iambi et Elegi Graeci; ‘Longinus’ perhaps merited inclusion, though his date is uncertain

The first, obvious, and overriding function of a lexicon is to tell the enquirer the meaning of a given word. Let us assume that the student has encountered a form of the verb ἀφίημι in the course of his/her reading. On looking it up in LSJ, s/he will encounter a full column of densely printed words, English and Greek, broken down under a variety of (not very clearly delineated) headings. Diligence is required, and is likely to supply the required sense in due course. However, in CGL, where again a full column is called upon, fifteen separate meanings are clearly set out, with subordinate meanings (perhaps from middle or passive voices), as necessary, and s/he will indeed be an indifferent student if the appropriate meaning is not readily apparent. (Individual authorships are listed, but not specific quotations, thus allowing for fuller description of meanings, and entries are organised according to meaning, with a view to showing, inter alia, the developing senses of words.)

Nouns—even abstract nouns—present fewer challenges to the lexicographer, but this is emphatically not the case where particles are concerned. J.D. Denniston’s famous remark (‘Of course, καί can mean “and”’) may be apocryphal; not so, David Goldstein’s recent implausible cry—in a book devoted to an examination of LSJ—for a Gesamtbedeutung of γε. The word takes up a full column in LSJ; in CGL generous space is also allotted under three main headings, with six sub-headings under A, three under B, and two under C, with illustrations of the word’s use as apposite: above all, the student will see how the word functions, and the same can be said of γοῦν, separately listed with five headings. As for γάρ, six headings are given, with a short introduction to explain the main uses of the word: of course, while Denniston-Dover’s Greek Particles need emphatically not be discarded, it will doubtless play a less central role for the generality of (even keen) students.

The Lexicon (as noted) is aimed primarily at students, though one wonders whether the (very reasonable) price will prove a deterrent. The volumes’ presentation is attractive, and, above all, clarity has been achieved. Production of lexica can take many decades to reach fruition, if ever they do: all the more credit to CGL’s editors, present and past, for completing their truly formidable task in only twenty years. LSJ is not replaced (perhaps it never will be), but the world of classical studies is enormously the gainer thanks to CGL. It will be an essential purchase for all institutions of learning where ancient Greek is taught.