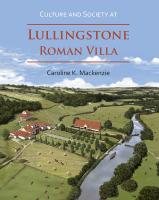 The River Darent rises in the Kent Weald and runs northwards to join the Thames, with the Darent Valley cutting through the North Downs.  Lullingstone Villa sits on a terrace cut into the hillside 55 metres west of the river.  Watling Street crossed the valley 5 miles to the north and would have been linked to Lullingstone by a minor road.

Development of the villa started in the mid first-century during the post-conquest period.  In AD 90-100 a house was constructed in flint and mortar.  About eighty years later the house was expanded, with the addition of baths, kitchens and an external cult room.  A well was dug to the south of the bath block.  There was a painting of three water-nymphs in a niche within the cult room.  The nymphs probably kept an eye on the water supply—a relatively easy task, given the proximity of the river and the well.  There were further home improvements in AD 275, with the addition of a veranda and two east-west cross-walls.

Soon afterwards a massive granary and temple-mausoleum were added.  The granary had a floor area of 276.5 square metres.  This implies that a substantial area of farmland was attached to the villa.  The valley provided fertile soil for growing crops.  The hills behind the villa would have been excellent for grazing cattle and sheep.  There was probably a formal garden attached to the house: we know from botanical evidence that this was a feature of other high end Roman villas.

The fourth century was the golden age of villa culture in Britain.  So it was at Lullingstone, where lavish and expensive mosaics were added.  The mosaic in the central room portrayed Bellerophon riding the winged horse, Pegasus, and killing the chimaera.  At the corners were roundels depicting the four seasons.  An apsidal dining room (triclinium) was also added in this period: the mosaic floor portrayed Europa riding across the sea on a bull, with two cupids—one leading and one following.  Above the heads of Europa and the cupids was an elegiac couplet.

The villa may also have served as a house church in the fourth century.  There is a Chi Rho wall-painting in a room which may have been used for Christian worship.  Other wall paintings in the same room may have Christian connotations, although some (including this reviewer) have questioned that interpretation.

In this beautifully illustrated book Caroline Mackenzie provides an account of the villa and its social setting.  She devotes one chapter to detailed discussion of the mosaics.  She explains that scenes from classical mythology, such as the Bellerophon mosaic and the Europa mosaic, showed that the villa-owner was familiar with Roman mythology.  The elegiac couplet in the triclinium has echoes of both Virgil and Ovid, but it is not a quotation.  Possibly the villa-owner himself composed it.  This would have been yet further evidence of his immersion in classical culture.

As the author demonstrates, the villa was designed to impress.  The temple-mausoleum showed where the dominus would lie after his death.  One of the ‘season’ roundels at the north-west corner of the Pegasus mosaic showed a female head with cornstalks in her hair.  This probably signified the agricultural wealth of the villa.  People would appreciate this, having just seen the massive granary on their arrival.  Many visitors would get no further than the central audience chamber.  Only privileged guests might enter the triclinium, where they could dine on a semi-circle of couches.

The author weaves into her text numerous references to other villas and compares them with Lullingstone.  This feature and the broader discussion of the social setting makes the book much more than a guide-book.  It is a ‘must’ for anyone planning to visit Lullingstone and has much to offer any reader with an interest in Roman Britain.