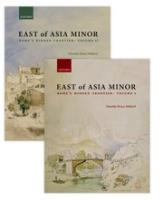 Here is something quite special. This is Timothy Bruce Mitford’s lifework, the result of over half a century of travel, study and research. These two sumptuous volumes, the first comprehensive study of the eastern frontier of the Roman Empire, amount to a vast treasure trove in which historians and archaeologists will be digging for years to come. Over 750 pages, including maps, glorious colour photographs, drawings and plans, bear witness to innumerable journeys over often inhospitable terrain across territory visited infrequently by modern scholars.

It is also an act of maxima pietas, rightly dedicated to his late father Professor Terence Bruce Mitford, whose wonderfully vivid lectures I recall from St. Andrews. And like his father, Timothy brings us right down alongside him onto the roadside and up and down the mountain tracks. No recent work of ancient history that I have read has so freshly conveyed the actual topography, the rivers and mountains, the villages, the agriculture and the climate. It’s all here, everything from temperature and snow melt to the distinctive design of fortlets and bridges. You travel again with Freya Stark but this time with all the supporting scholarship and footnotes.

Why has the eastern frontier been so badly neglected ? Access of course was always difficult, and has become more so: the author had serious problems in getting permits and access from the 1980s onwards as the region became less stable and Turkey more sensitive to visitors to its eastern provinces. Some of the evidence has gone: the frontier itself was overrun after Justinian, and its garrison towns destroyed by Persian and Arab conquerors. Some of its remaining physical presence has subsequently disappeared, as new dams and roads have been built, and more modern wars have intervened in northern Syria and Iraq.

But the eastern frontier itself is hugely important. Five times the length of Hadrian’s Wall, in places seven times its height, it both predated and easily outlasted its British and German counterparts. For over 250 years the frontier was remarkably static, guarded first by legions at Satala and Melitene, the key crossing points on the Euphrates that controlled the principal roads into Cappadocia; later, a third and fourth legion were deployed at Samosata and Trapezus, covering the approaches to and from Colchis and Iberia in what is now Azerbaijan.

With Bruce Mitford we almost walk it all, travelling south to north along its entire length, from the plains of Mesopotamia, through the Taurus, into Armenia Minor and the Pontic coast. From the surprisingly rich literary and numismatic evidence we can now re-examine successive emperors’ fluctuating policy towards the threat from Parthia, Armenia and tribes further east. They tried incorporation, then client kingdoms, until Hadrian effectively withdrew to the Euphrates itself. But whatever the threat from the east, and the need to retain always the ability to punch outwards to meet it, what comes across most vividly is the frontier technology—the towers, the beacons, the signalling points, the uniform eight metre roads—that enabled the auxilia to do their job.

Detailed chapters on inscriptions and on the key coin finds are followed by nearly two hundred pages of supporting information, including numerous maps (essential for those who might not know their Commagene from their Antitaurus) and no fewer than ten separate indices. The Eastern Frontier need remain hidden no longer.

The reviewer was Defence Secretary 2014-17