THE ORIGINS OF THE ROMAN ECONOMY: From the Iron Age to the Early Republic in a Mediterranean Perspective 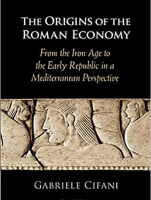 How did a single settlement in the Tiber valley become the centre of the most successful and longest-lasting of the world’s empires?   Of all Plato’s ‘frogs around the pond’ why was it Rome, originally controlling just a ford across a river, that emerged as the major city of the Mediterranean?

In this study of Rome’s early economic history C. points us towards some of the answers.  But first, he urges us to strip away all the ideological clutter.  Over the years that economic history has come in all shapes and sizes: Marxist, reductionist, minimalist, prioritist, modernist, positivist, ethnocentric—take your pick.   Some of these interpretations came very early: it suited Augustan writers to paint an idealised picture of an austere pre-classical Rome in simple pastoral colours.  Later ideologues wrestled with the dialectic between agriculture and pastoralism, and with theories of implicit evolutionism.

C. steers us away into more productive analysis, carefully balancing the archaeological and literary evidence, and deliberately avoiding later constructs such as ‘Etruria’ and ‘Latium’. He shows how by the 7th C BC economic activity in the lower Tiber valley was built on much more than subsistence: it powered a network of local trade and barter based on standardised weights and exchange.

And the Tiber valley, navigable then up to the city of Rome, was well-placed for maritime trade too, eastwards to the Aegean and the Levant, south to Sicily, and through the strait of St Boniface to the western Mediterranean.  Cities like Reggio, Marseilles and even Cadiz were only a week or so’s sailing away.  Glass was imported from the eastern Cyclades, amber from the Baltic, high quality metalwork from Cyprus and Syria.

So external trade grew steadily in the 6th century, with well-established routes to the east Mediterranean (Etruscan bronzes have been found on Samos, bucchero at Miletus), south to Campania and Sicily, north and west to Sardinia, Marseilles and Languedoc.  Carthage, controlling Roman access to western Sicily and Greek access to Etruria, was in the most powerful position of all but trade expanded for everybody with bigger ships up to 40 tonnes (and more shipwrecks). The first trade treaty between Rome and Carthage, 509 BC, carefully delineated four separate geographical areas and applied different trade rules to each of them.

Coinage, interestingly, seems to have come late to Rome, in the late 4th C BC and well after the Greek states. The latter used it specifically to pay mercenaries and were perhaps more heavily involved in maritime trade. Across the central Tyrrhenian area, by contrast, currency systems were based on weighted bronze or other commodities.  Neo-classical metallists argue with chartalists as to whether coinage was first a medium of exchange or a unit of account but did silver and gold favour the trader over the artisan craftsman and the cattle-owning landowner?  Was the late adoption of coinage, as C. suggests, evidence not of Rome’s backwardness but of a conscious conservative compromise aimed at protecting the social equilibrium?

But any currency system inevitably leads on to an increase in state control.  In Rome that early political economy saw enlightened regulation of private property, debt and interest; in hard times food distribution was centrally directed, and the use of luxury metals in family tombs restricted.

The 5th C BC saw several other turning-points: Rome’s military operations against Etruscans, Latins, Volscians and others; the codification in the Twelve Tables (450) of important and complex laws governing property and commerce; and measures to expand food production and supply to cope with a rapidly expanding population. Conquests of neighbouring areas provided slaves and land to be distributed to Rome’s citizens.

By the 4th C we had social reform, voting rights and more systematic taxation, in particular of the salt monopoly, that helped to fund an army and a navy.  There was a programme of spending on major roads and the construction of the first aqueduct.  The archaeological evidence here outpoints the literary: this was no pastoral archaic Latium but a fast-growing, increasingly urbanised society that accumulated wealth through lower transaction costs, specialist craftmanship and extensive maritime trade. C. has interesting chapters on all of this, including detailed discussion of land ownership, agricultural cycles, local production and trade in pottery, textiles and metals.

Why was Rome an early Mediterranean winner?   Its geographical position straddling the Tiber gave it a sub-regional dynamic; it was also well-positioned, like Carthage, to benefit from both east and west trade across the ‘great sea’.  Carthage too had its commercial traders and specialist craftsmen.  But unlike Carthage, Rome’s early leaders took those key politico-economic decisions—on the ownership of private property, on the regulation of debt, on the levying of taxes, and on public spending on walls, aqueducts and roads—that paved the way, literally, towards the foundation of the powerful imperial city that it was to become.